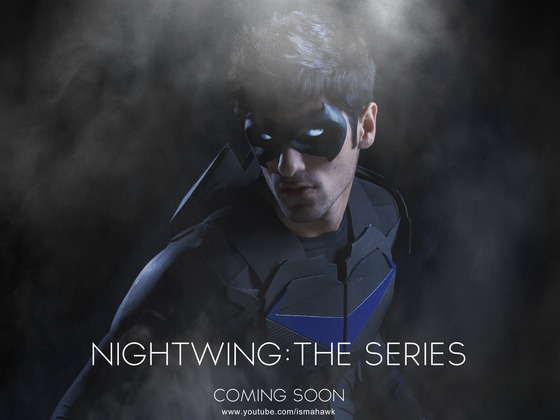 When I saw that a friend had backed the Kickstarter for Nightwing: The Series, based on the DC Comics Nightwing character,  I had to check it out.  I watched the video by Danny Shepherd and Jeremy Le and it looked pretty amazing for having been shot, edited, and released in only three days.

Danny just graduated from the University of Nevada in Las Vegas in May and had it online and racking up hits in July and it has been quite a hit.  So I had to put a few bucks into seeing what they can do with a little more time and money.  Then I contacted Danny, AKA Ismahawk (his X-Box Live gamer tag meaning Hawk Assassin when he created it at 15) for an interview.

John Collins (JC): Tell me and my readers a bit about yourself sir.

Danny Shepherd (DS): I graduated film school in May of 2012 and immediately partnered up with my best friend, Jeremy Le. We began making short films and scenes for my youtube channel, Ismahawk. In July 2012 only a few months after graduating we shot, edited, and, released a Nightwing fan film by the name of Batman: Nightwing, in only three days. It received quite a bit of praise and reached over 1,000,000 views.   Jeremy and I are currently working as full time, youtube partners. A local studio here in Las Vegas, MG Studio, took notice of our ambition and offered to help produce a 3 part web series focusing on Nightwing.

(JC): Very cool!  Tell us a bit more about your Nightwing series.

(DS): Nightwing: The Series follows the story of Batman’s ex-sidekick Dick Grayson. After a falling out with his former mentor, Dick abandons his role as Robin and sets off to become his own man in the city of Bludhaven. The series will be three parts and feature some cameo appearances from heroes and villains from the Batman’s Universe. While we plan on staying true to many elements from the comics, we are still taking heavy inspiration from Batman: Arkham City, The Dark Knight Trilogy, and also the Batman animated series’.

(JC): What are your plans beyond Nightwing: The Series?

(DS): Nightwing: The Series is a non-profit, fan film, so it’s just being made for fun! But we definitely hope our work here will open some doors down the line for making full blown films. Hey you never know, maybe DC will get behind us and help us make more of the series for youtube or maybe even tv!

(JC): I wish you well on that and am looking forward to getting my copy of the DVD!  Now, I like to close my interviews with giving my interviewee the opportunity to tell my audience something weird and wonderful about themselves.  Do you have anything you would like to share?

(JC): Thanks so much for taking the time to do this interview and I will look forward to seeing more from you and your team in the future.  In the meantime beware the Wisconsin Gouda ninjas with the milk bombs!

Any resemblance to the King John character is merely a coincidence.